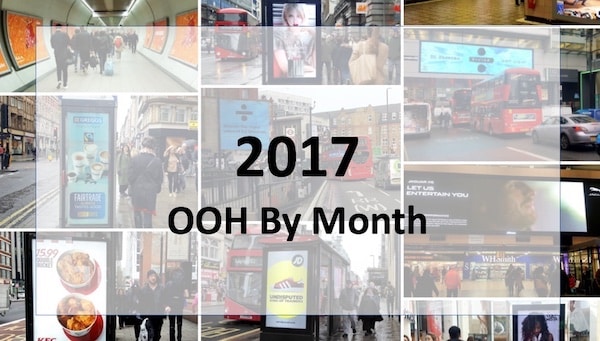 If a picture paints a thousand words (according to David Gates and others) then a successful advertising campaign ought to do more than simply sell a brand. Done well, OOH and DOOH expresses brand values, amuses, informs, intrigues, challenges and…yes…sometimes moves us.

And what are the essential ingredients of a good ad campaign? It depends upon your brand, your audience, your campaign objectives and your approach.

Allow us to illustrate what we mean. We’ve looked back over our campaign library for 2017 and selected a standout ad for each month. Take a look and see what you think of our selections and our reasons.

Maybe you see it differently? Have a browse and let us know. We’re always open to a little gentle persuasion – it’s what advertising is all about!

JANUARY: This Lloyds Bank ad may very well be a still from their TV campaign. It gets our vote because it has emotional impact, shows the brand has inclusivity at its heart, and does all this with two people and three words. It’s a fine example of a traditional bank showing its modern credentials. 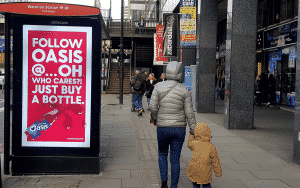 FEBRUARY – This Oasis ad uses a small colour palette and relies on humour to pack a punch. It cuts to the chase, telling consumers what they’ve always believed about advertising, and sniping at social media campaigns into the bargain. Doesn’t mention its parent company and competitor though! 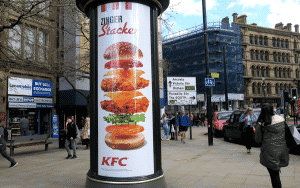 MARCH – This KFC ad caught our eye because of the clarity of the imagery and the intelligent use of the advertising space. Everything you need to know is right in front of you without any filling (see what we did there…). Not suitable for vegetarians!

APRIL – This Oatly ad embraced its urban location and created something more unorthodox than a typical 64-sheet display. Its minimalist colour scheme, arty design and mention of a barista show confidence in the brand. One of several murals, this one could be considered part of a cereal campaign.

MAY – This JD Sports ad demonstrates that OOH and DOOH can be both responsive and timely. It also shows that some ads are a way for brands to reach out to people without necessarily expecting anything back. It’s not always about a clever tagline and sales pitch.

JUNE – This ad for a Jay-Z album celebrates the adage that less is more. It provokes a conversation, albeit one that may start: “What the heck is this?” It takes some cojones to run with only an album’s cryptic title, but 4:44 was nominated for a Grammy so their confidence wasn’t misplaced. 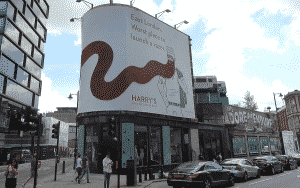 JULY – This Harry’s banner ad manages to tick several boxes. It is perfectly placed for the wraparound flowing graphic, it shares a knowing gag that only a segment of the audience will get (Hipsters have a sense of humour, right?), and it’s specific to the East London location. Razor sharp, you might say. 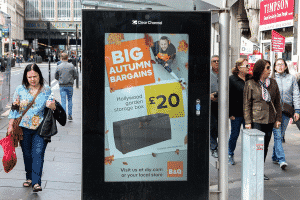 AUGUST – This B&Q ad sticks to the fundamentals of advertising. It knows its audience and it understands what matters to them. Clear, unambiguous and price-driven. Sometimes the straightforward approach is the best one, especially when it chimes with the brand’s core values. 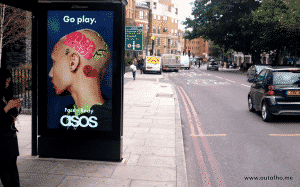 SEPTEMBER – This asos ad is so eye-catching it cannot be ignored. The imagery is both beautiful and strikingly modern. You can also wile away a minute or two trying to read the model’s head. Another ad perfectly pitched for its target demographic. Play on! 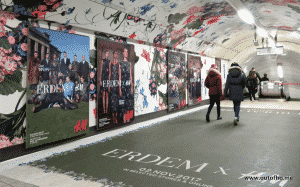 OCTOBER – this Erdem ad attempts to answer the riddle: When is an ad not an ad? When it’s an experience. The combination of location and design produce something immersive and memorable. This ad also stands out as a two-brand tie-in. The London Underground never looked prettier! 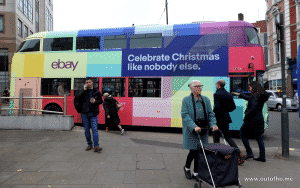 NOVEMBER – this ebay ad demonstrates the potential of advertising on the move. A mobile and constantly changing audience needs a succinct message, in this case augmented with a colourful but simple background. One seasonal reminder and then the brand speaks for itself. You could say the world’s their oyster… 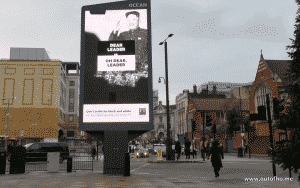 DECEMBER – This Financial Times ad does something unusual – it talks up to its target audience. A dash of humour and some photorealism images, rounded off with a suggestion that only you can see through the façade. Read this, it whispers, because we know the truth as well.

We hope you agree with out choices for 2017 but if not, tell us which ones you’d have chosen.

And if we could suggest a New Year’s resolution for you – after all we have your OOH interests at heart – why not check out our Campaigns Library every fortnight. If you’d like us to email when it’s first published drop us a note (click here) with your email and you’ll be the first to know.