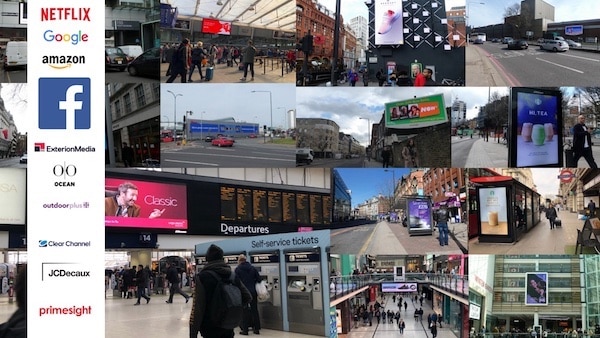 We hear a lot about disruptive technologies, those hardware and software innovations that challenge existing markets and create new ones, but rarely consider the mindset behind them. Much like the Daleks’ Cult of Skaro (if you prefer factual science, stick around!*), true innovators think differently.

The DOOH space has benefited hugely from tech developments, delivering a richer advertising experience through the use of AR/VR, anonymised vehicle recognition, Beacons, NFC and Wi-Fi enabled ad sites. The datasets from all of the above, plus mobile (the portable life cache!) have driven insight, analysis, segmentation and modelling. And yet…isn’t it all becoming just a little bit samey on the outside?

Back in the day, Pirate Radio introduced a completely new approach to broadcasting, before a combination of legislation and assimilation by BBC Radio brought those ideas into the mainstream. Tech giants such as Google have charted a similar course, buying into or absorbing emerging companies that identify a niche few others had considered. Some would say that the spirit of independence is a trade-off in the process.

However, the true disruptors go it alone, remaining independent or creating strategic alliances on their own terms. Think Uber (OOH-ber!), Airbnb or Lobster – who not only challenge the marketplace, they also transform consumer behaviour.

But where are the OOH equivalents capable of that degree of impact?

There are no new chairs at the top table of major contractors (JCDecaux, Clear Channel, Primesight, Exterion, Ocean Outdoor, Forrest) and the many niche players principally sell OOH and DOOH at specific venues and locations.

Aside from guerrilla campaigns, is there space (literally and figuratively) for fresh blood and fresh ideas? Some new entrants to the market are selling OOH directly on the web (e.g. Adquick.com, advertiise.com, signkick.co.uk and toad.direct), but this is still relying on an existing, albeit global, platform.

The way we see it, there are three principal barriers:

Solutions – some more fanciful than others:

FANGs ain’t what they used to be? 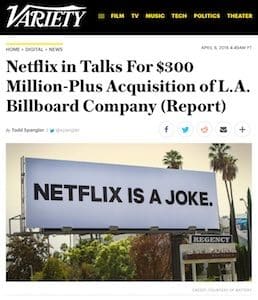 Facebook, Amazon, Netflix and Google are at the forefront of technological innovation, so when one of the four horsemen of the digital dictatorships develops an acquisitive interest in traditional OOH it raises some interesting questions.

Taken at face value, Netflix’s strategic objectives may be to reduce its $2bn annual advertising expenditure in the long term, and keep space from its content competitors. But here’s the thing – both Netflix and Amazon have already crossed the boundary from content providers to content creators. Who’s to say the same won’t happen for OOH and DOOH? Perhaps we’re witnessing another stage in the evolution of the FANGs (and maybe other acquisitive tech or mobile sectors) prompting the start of a disruptive feeding frenzy.

* We always deliver on our promises. Let there be robots!